PICKERINGTON, Ohio (May 7, 2007) – The American Motorcyclist Association offers heartfelt condolences to the family of Ethan Gillim, 10, of Philpot, Ky. Gillim passed away from injuries suffered in a racing accident Saturday, May 5, at the Paducah International Raceway in the Southeast Amateur Nationals, a round of the AMA Sports Black Cat Gold Dirt Track Championships.


According to reports provided to AMA Flat Track Director Ken Saillant by the event promoter, Gillim lost control of his motorcycle and crashed during a heat race. Gillim was transported to nearby Lourdes Hospital but passed away later Saturday evening.


Paducah International Raceway was planning on canceling all races Sunday, but the Gillim family asked that the races continue in memory of their son.


“We are stunned and saddened at Ethan’s passing,” said Saillant. “Many of us at the AMA watched Ethan come up through the ranks over the past few years and it was obvious that Ethan had a bright future in the sport. We extend our deepest sympathies to both the Gillim and Hayden families.”


Ethan is survived by his parents, Frankie and Kerrie Gillim, and brothers, Frankie Lee, and Hayden. Arrangements are being made by the family. 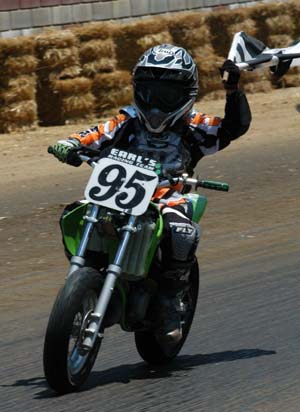